It’s now just 5 days until we leave for Paris and, despite the slight creeping fear and trepidation of what’s in store, I really can’t wait to get going. My packing, on the other hand, does not reflect that eagerness! 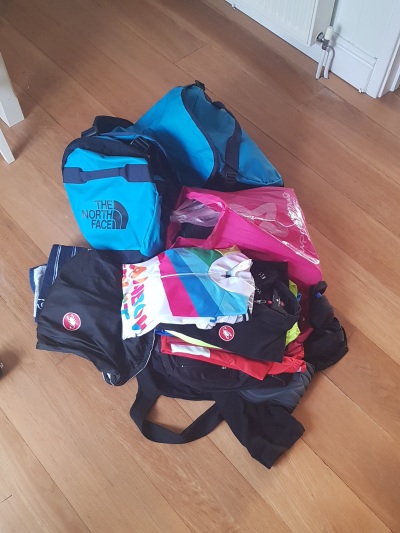 Watching Le Tour has certainly helped to stoke the anticipation. Though we won’t be emulating the feats of Uran in Chambéry or Bardet in Peyragudes, watching these guys at one with their bikes conquering some of the toughest roads in France stirs the imagination and makes you pine for the open road. Seeing their faces contort and twist as they do battle with gradients I’d struggle to walk up always reminds me of this fabulous quote

“It doesn’t matter if you’re sprinting for an Olympic gold medal, a town sign, a trailhead, or the rest stop with the homemade brownies. If you never confront pain, you’re missing the essence of the sport” – Scott Martin

Adam and I obviously have a special reason for doing what we’re doing, an added incentive to keep going until the Eiffel Tower looms into view next Saturday. We have been humbled by the support we have received from all corners and we’re delighted that, going into the ride, we know that the Rainbow Trust will be over £5,000 better off due to the generosity of our friends and colleagues.

Tomorrow I’m planning to go out and do a small recce of part of the route we are going to be doing on the first day. Running from Addington to Seal, the 18 mile stretch climbs gradually for the first 8 miles so it is bound to be a bit of a long drag but it will give me an opportunity to try out my new GoPro set up and have a bit of fun on the bike before the serious stuff starts

After that it really will be about figuring out what to pack! Weather in France looks fairly warm next week so I don’t envisage needing the thermal jacket!

← A plea for monies
Recce For Wednesday →