One Week On Tarmac

I’ve had my bike a little over a week, yet I’ve instantly seen dramatic improvements that come with a switch to a bike with a better specification. I went out on the Sunday with my pal Ben (a veteran of the Etape du Tour) who is a very experienced cyclist and we covered about 50km. As soon as I leave my house I have a descent, quickly followed by a short sharp climb on the way to Purley. With my old bike, I could fly down the descent and get about half way up the other side before I would have to put any significant effort in but with this new bike it felt completely different and so it would be proved by Strava upon my return home 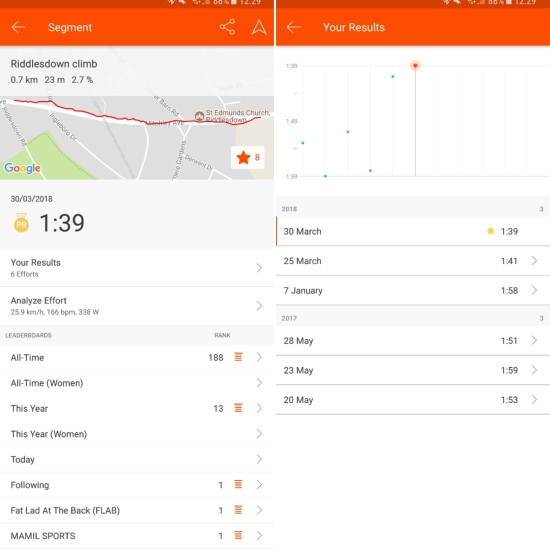 I had beaten my previous best time on that segment by 10 seconds and, the following Friday, I would knock a further 2 seconds off that time.

I went to Corridori Cycle Shop on Good Friday for a bike fit to get everything set up correctly. I met the owner, Guy, who was very knowledgable about everything to do with cycling. He had won a Commonwealth Games bronze medal riding as part of the GB Team Pursuit team in 1986 with Chris Boardman and had several years pro riding under his belt, including appearances at Paris-Roubaix and a national championship. He has owned the shop for over 20 years and counts Joanna Rowsell on his list of clients amongst many other well known GB riders.

In truth I had little to be changed with my bike, I had it set up fairly well, but it was good to get that fit done to sense check all of the changes I’d made. One thing, however, did make a massive change to the overall feel of the bike – for comfort more than anything Guy suggested turning my stem upside down so that it rose to the bars rather than the usual gradual decline. It was only a 6 degree stem so I agreed and I instantly felt in a more comfortable position and it did feel different as I made my way home in the rain.

The following day I went out again, to get some more time on the bike and to test the new configuration. The snow and rains have had quite an impact on the roads, some sizeable potholes are opening up and there was a lot of dirt and gravel washed into the roads so I knew I had to be careful.

I took my bike down to Clarks Lane, another favourite segment of mine as I know my times and it gives me a good indication of where I am fitness wise. It’s only 1.2k at an average of 4.1% but it has a nasty little sting in the tail and I love it and hate it in equal measure. Again, upon my return home, I loaded up the Strava segment with interest….

….another segment where I have wiped 10 seconds off my best time instantly!

It’s fair to say that I’m enjoying this bike, a lot! It’s stiff, quick, corners on rails and climbs like an absolute dream. I can’t wait to get back out on it again.