Ride London was a disappointment, as previously mentioned. The fall, the rain, the closure of the Surrey Hills and (most saddening) the passing of Nigel Buchan-Swanson on Ockley Road. I have just glanced at his Just Giving page and the donations are almost at £17,000 which is lovely and the comments are both heartwarming and heartbreaking at the same time, a fitting tribute to a guy who was doing what he loved.

As others rested and slept after that gruelling course, I was up at 3am to go to Spain to visit friends of ours at their villa in the foothills near to Lliber which is a small village 20 minutes from the coastal towns of Xabia and Calp. If you are looking for a place to stay with close access to some wonderful cycle routes then you have found it as it is within easy reach of the Coll de Rates, the popular training ground for the pros.

It’s a beautiful place, slightly out of the way so you need a car of some description but it is an ideal spot for a base and some peace and quiet (if my kids aren’t there!).

I hadn’t planned to do much last week, aside from borrowing a mountain bike to head into town for a bit of a look round, but the scenery changed that and the hills were calling so I decided to go and try one of the easier 25 mile routes in the vicinity. That said, 25 miles in August temperatures is not easy, as I found out! I planned a route that would take me on a nice long climb at a fairly low average gradient, but give me the thrill of a full on descent the other side.

As you can see there’s a lovely winding, hillside road that climbs for 7.5 miles at an average of 2.9%, with only the crest of the climb reaching ramps of over 15%. However, less oxygen mixed with a mountain bike and no proper kit made that extremely difficult. The first part of the climb had me smiling from ear to ear, it was simply stunning. The views from the road were so good that I was forever stopping to get a better picture!

The road snaked round the hillside, climbing upwards towards the summit and it got hotter and hotter! I took it fairly slowly, enjoying the signs warning cars to give cyclists at least 1.5m clearance (which they did!) and the information at every km which told you what the max gradient and metres climbed would be in the next km as well as the total distance to the summit! It was a fantastic setup for cyclists, excuse the image below as it was a grab from a video I took 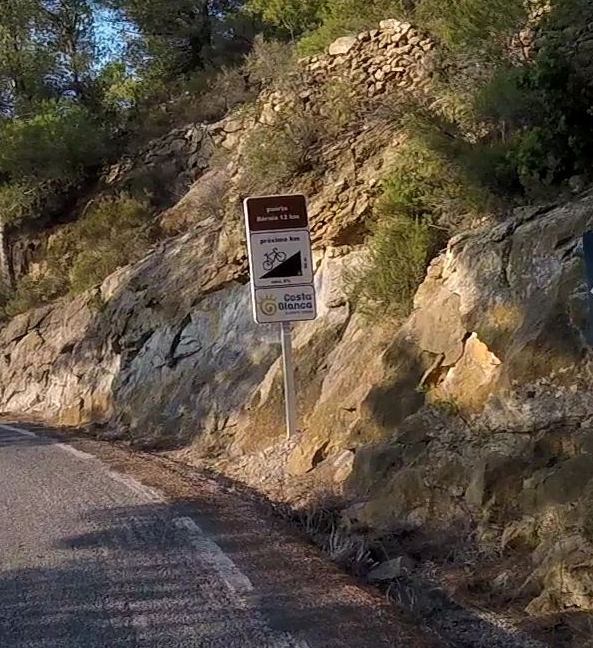 The crest of the climb was, as mentioned, a real sting in the tail but the reward was amazing

I took on the last of my water and enjoyed the view as the sun beat down mercilessly on my shoulders. With the water finished, it was time to head back into Xalo and home to the villa, a 6 mile descent at an average of -5% which had me squealing with glee as I kissed the apex of the right hand corners and descended as quickly as that mountain bike would let me. It was exhilarating, I’d never felt that free, such a buzz. The only thing was that I didn’t video it, but after climbing back out of Lliber I did video the descent to the villa using my newest GoPro mount…..my mouth!

Amazing roads, friendly cyclists, friendly locals. A great little bike shop in Xalo as well as a cyclists cafe and almost guaranteed good weather. I’m glad I went on that ride to have some fun on a bike again, it was the tonic I needed and I’ll be back with my road bike and my kit……

……maybe I’ll go and hang out with the pros on the Coll de Rates!