I guess I should have seen it coming. In the weeks following spending £600 on a new smart trainer we’ve had some of the best Sunday ride weather in any November that I can remember! You can tell that winter is on its way though, I’ve been glad for a gilet and the ever sensible DeFeet Slipstream Oversocks when dry (Prendas overshoes when wet!). The temperatures may be starting to dip but the low sun has been out, making lovely scenes with the autumn colours as it goes and only a few minor flooding incidents to contend with.

I’ve managed a couple of good rides over the past couple of weeks, not long distances by any means (56km and 65km) but enough to keep the legs turning over and I’ve made the most of the weather by trying to visit some new places, see some new things or have a crack at some roads that I haven’t been down in a little while.

A couple of Sunday’s ago I planned to do something different to my usual route, where I would usually take the left fork to go to Downe I would take the right fork to Cudham and up to the Blacksmith’s Arms. For whatever reason I had not been that way since I was riding my old hybrid bike and I rediscovered a road that was actually pretty fun! It had a bit of a gradient so I’m guessing it was that which made me dismiss it as ‘not fun’ all those years ago.

It was a beautiful day following the rain the previous day so I made the most of the opportunity, fearing it may be one of the last this year, but last Sunday was absolutely glorious so I set out to do a few favourite roads and some new ones.

I’d read about a place nearby where there was an open water swimming lake so I decided to go and take a look. It is closed for the season now so there was nobody there but it is a magically calming place

I’m tempted to have a go at open water swimming when the season starts again in March/April time. I think I would be terrible at it but I can understand the appeal, not feeling constrained by the boundaries of a swimming pool.

Sunday’s ride was beautiful. I did my usual route back in to climb up to the top of the North Downs and the views were as good as the middle of summer, I do feel lucky to have this on my doorstep

Then, on Monday, on a still cycling related note, Adam and I attended the live tour show of the Cycling Podcast. We’re big fans of this podcast, it becomes a soundtrack to the summer especially during Grand Tours when there are daily updates. It is presented with a wonderful balance of knowledge, humour and special guests from the world of cycling who have a massive respect for the way this is presented. We joined regulars Richard Moore and Lionel Birnie as well as the wonderful Francois Thomazeau and Mitchelton Scott DS Matt White to listen to some great stories and thoughts on this season. Thomazeau crooned La Marseillaise in a lounge style that could gently send anyone to a peaceful slumber, while Matt White told a story about Niki Terpstra and Luke Rowe that I will never forget!

Wonderfully we were able to get our books signed by all four of the participants that evening…. 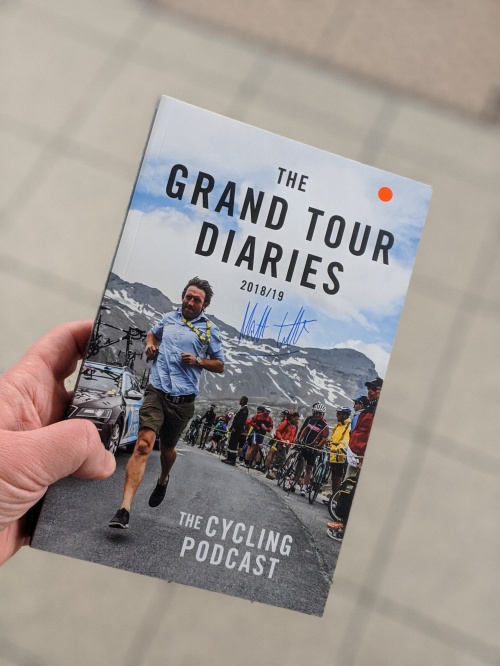 The cover photo is the wonderful Matt White, running to get bikes and riders onto and into team cars after Stage 19 of the Tour de France was cancelled due to extreme weather and landslides this year. Bits I have read of this book are brilliant, a great Christmas present for any fan of pro cycling